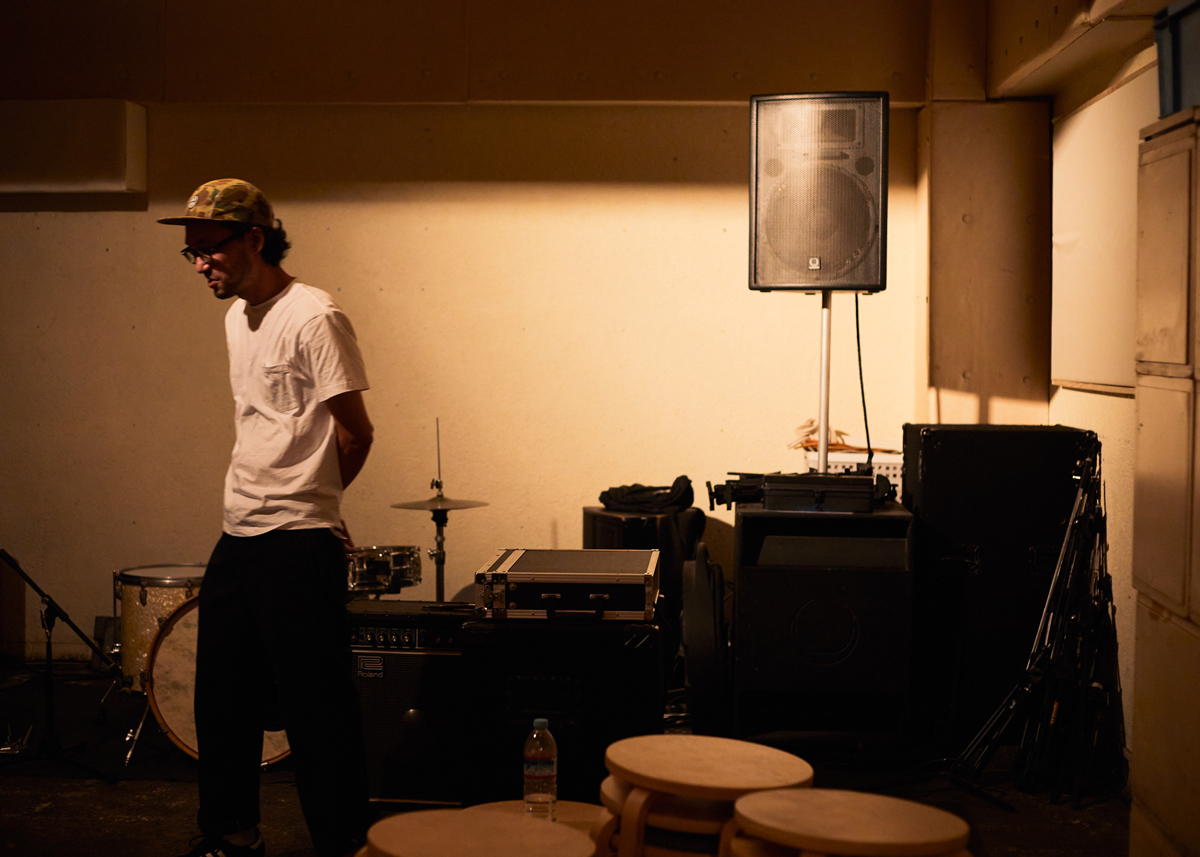 When you started, were you vaguely thinking of a solo project of electronic dub?

SaharaYes, I was thinking of doing it solo. All those three years, I spent my time not showing up at any reggae scene or visiting clubs. I felt like if I didn’t have anything to show, I couldn’t keep face to those people who cared about me starting with Akimoto san. Then once I decided to focus on dub again, out of the blue, Kochi san contacted me and said: "I’m doing a band called Reggaelation IndependAnce and there’s a gig at Aoyama CAY so come on over." That’s when I bump into Ohkuma, whom I hadn’t seen in quite a while. When I saw him, I thought to myself: "this is it!"

SaharaI never thought about the idea of making a band, but when I saw him, I thought: "this is a great idea."

When did you meet Ohkuma san?

SaharaThe first time we met was at Soul Dimension’s gig. They had their first album out in 2007 so around then. I was in the Heavymanners as well as Dubwiser at the time, and either Testu san or Kochi san said "there’s a reggae band that has an interesting drummer," so I went to their show to checked them out. They made me interested because there weren’t many dub bands around my age in the scene at the time. Their earlier pieces, I could tell by their band formation and style that they liked Sly and Robbie as well as Dry and Heavy and Cultivator. After the show, I went up to Ohkuma and we went for a drink couple times after that. He would come see the Heavymanners too. At the time, I simply liked the way he carried himself when he was playing the drums.

And then when you made the decision to pursue dub, you have a coincidental reunion with Ohkuma san and came up with an idea.

SaharaRight. At the time, he was still in Soul Dimension so I went to see them perform like the following week and asked him if he was interested. That was around 2013.

Was Undefined bassless from the beginning?

SaharaWhen I first asked him in 2013, I thought about a dub trio with a bass player. So, we asked around and did studio sessions with a few bassists we knew but it didn’t quite feel right. It wasn’t their fault but for me, it was probably because I spent so much time with Akimoto san that I had this firm image of a reggae bassist so that made it difficult. I never said that out loud but I think Ohkuma knew how I felt. We were already in studios practicing and one day, he said "we should just start, just the two of us." After that, it was quick until our first gig.

How did you come up with the name Undefined?

Sahara We were aiming for dub that hasn’t been done before, dub yet to be defined as an expression so I thought it was fitting. I suggested the idea to Ohkuma and he approved.

How about the label name?

SaharaNewdubhall originally comes from the word New Jazz Hall, which is written in Free Jazz in Japan. New Jazz Hall was a space for free jazz artists where they renovated an instrument storage on the second floor of Shinjuku Pit Inn. The jazz artists at the time hadn’t much place to give an avant-garde performance even if they wanted to and that story made a great impression on me. We also wanted to create such place and pursuit our way of expression. It’s a label name but at the same time kind of like a place where we belong.

How does composing start for Undefined?

SaharaThe first structure starts by our session in the studio. We’ve tried making a demo a few times but it never worked out well (laughs.) At rehearsals, without the clicks syncing, I play the basic instruments like the synthesizer, organ and the piano and Ohkuma will play the drums. If we grasp something, we then start the recorder and begin recording, using DAW to widen the composition. Once it’s somewhat composed, we ask Taichi kun for recording and finish off. We sometimes use the original material of what we recorded at the studio, and sometimes consider it like a sampling source and elaborate from there.

Technically you (Sahara) put the piece together and have Ohkuma san listen to it? Do you not sit in front of the screen and work together?

SaharaWe don’t work together after the recording but obviously his reaction is important and I care about the most. I have him listen to what’s done and if it’s ok, I send the data to E-mura san, who does our mixings. E-mura san does all the necessary audio processing and adjustment starting with drum sounds. So, Undefined’s full album will finally be out. It’s a continued release out from ZamZam Sounds since your 7inch ‘Three’ in 2019.

SaharaWhen Newdubhall released Undefined’s first 7inch, we didn’t really have a good knowledge about the current dub scene and found out about ZamZam Sounds after doing some research. Their releases were interesting and we wanted them to listen to what we came up with, so we contacted them via Facebook and asked if we could send them a copy. They gave us a response and that’s how things got started. Not only did they respond, they played the 7inch on various platforms such as radio and guest remix, and posted about it on their social media. Initially the foreign sales were like five but thanks to them, oversea orders soon came one after another and completely sold out. It turned out that Rewind Forward who is involved in Young Echo placed an order and such, so everything started to revolved around from there. The correspondence with ZamZam continued and when we completed ‘Three,’ we sent them the data and they offered us to release it. When they reached out to us with the offer, I was in the United States with Lucy, who does Newdubhall’s foreign distribution. I remember us being over the top excited.

Now on to the album.

SaharaWe aren’t dubstep, we aren’t new roots, we aren’t traditional reggae, we are quite hard to categorize. That wasn’t any different among abstract releases of ZamZam, so even though they liked ‘Three,’ they were a bit worried about the listeners’ response regarding the release. But the feedback was great and that probably led to their assurance and gave us the offer to release an album. When we were in the making, we thought it would be too fanatic to make it all instrumental so we asked Tikiman, Rider Shafique and from Japan, Ras Dasher to participate as vocals. The initial release was the April of 2021 but because of the pandemic, things got pushed back. By the way, Dasher san’s track will be in the 7inch that comes with the LP which was actually ZamZam Sounds’ idea to release it that way, from all the tracks we sent them.

What led you to ask Ras Dasher san?

Sahara Dasher san had this belief towards music which led me to think that he was a solitary artist rather than a person who would hang out among a bunch of crowds. As an artist myself, I resonated with and respected the way of his style. The track itself was recorded back in around 2016, so it’s relatively an early piece for us, which is more straight forward. Because of this, the drum pattern and the whole vibe of the track has some kind of atmosphere of the Cultivator and I thought about having Dasher san as a vocal. I reached out to him and explained my thoughts and he sent me voiced over version of the track. I think he understood where I was coming from. After the vocal recording, it took about two years until the release but at the end of last year, I called him and let him know that we finally turned in the album data. It’s really a shame that he has gone this year. I never thought such a thing could happen.

With the album finally being out, is there anything you would like to do with your own label?

SaharaWe are still lacking releases (laughs.) We have been offering artists who interest us but a lot of the time, the timing is off. Quality comes before quantity so like Babe Roots, we want to release those we are consent with. First off analogs and next, whatever, like tapes or zines but something tangible, something that will remain. When the pandemic is settled, we want to perform our heart out at places like Soup, Duusraa and Heavy Sick Zero, our grass roots and venues we feel close to.